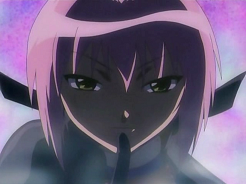 Michiru Mamiya (魔宮みちる Mamiya Michiru?)
Voiced by: Natsuko Kuwatani (Japanese), Monica Rial (English)
Ayumi's younger sister, who is determined to stop Ayumi from breaking her curse and one day becoming head of the Mamiya family. She knows that Haruo's powers extend far beyond the ability to break Ayumi's curse and she intends to use that power to take over the world. Michiru is unbelievably powerful and extremely malevolent. Her powers are able to surpass all of the girls magic when they chased her the first time when she took Haruo during the play. Haruo woke up thinking they were dead. Outraged, the demon lords power took over Haruo and easily overwhelmed Michiru.

Retrieved from "https://magikanoanime.fandom.com/wiki/Michiru_Mamiya?oldid=4055"
Community content is available under CC-BY-SA unless otherwise noted.